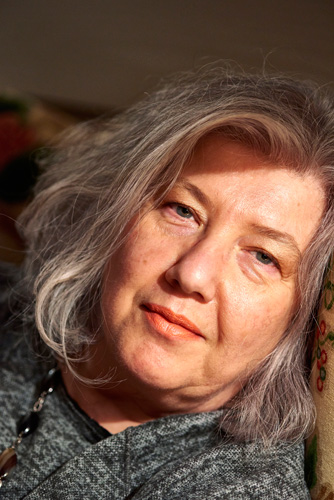 Patrizia Dalla Valle, mosaic artist and sculptor, has always been fascinated by Byzantine and Ravenna art, to whom she dedicated a major art project, Interno Bizantino.

The mosaic has fascinated her with colorful and luminist charm and has become the privileged medium to bring out her inner sounds. Such creative dimension is linked, in particular, to the place of her current residence and expressive action. Born in Budrio (Bologna), after spending more than thirty years in Ravenna, since 2010 she has been living in the city of Russi, a municipality closed to Ravenna.

Her formation started when she was attending Vittorio Bulgarelli and Paolo Racagni’s studios, but it soon moved towards an original and independent research on technique and design. The nature of Patrizia Dalla Valle is, in fact, characterized by a strong urgency of a constant experimentation on various materials and iconographic vocabulary, also deriving from her university studies, completed with a degree in scientific disciplines at the University of Bologna.

If the mosaic technique of the great Byzantine tradition inspires a significant section of her production, a search for languages closer to our contemporary world leads her to new experimentations though colors and light and even using different materials according to type and message.

These artistic and cultural projects are combined with other remarkable creations, which highlight her innate inclination to landscape and social realities, can be summed up in the term Impressions.

Patrizia Dalla Valle’s art was analyzed and appreciated by considerable critics both in fundamental catalogs, both individual and group exhibitions. Considerable artworks of her are part of important public and private collections. In particular, her most distinctive and significant production is documented in the book Ravenna e Bisanzio – L’eredità di Patrizia Dalla Valle, edited by Enzo Dall’Ara, published my Maretti Editore in september 2015.

Patrizia Dalla Valle had her artistic debut in 2001 and up to days numerous exhibitions have been held in Italy and abroad. Among these:

In particular, the Artist was invited to Matera in 2008 to partecipate in an exhibition about Byzantine art titled Phos (Luce), she was the first and only female artist to exhibit mosaic art in the cave church of Madonna delle Virtù and important articles commenting her work appeared on italian and foreign magazines. She also participated in artistic and cultural events in the historic “Muky’s Loggetta del Trentanove”, in Faenza (Ravenna) in 2012, as well as in high fashion events devoted to Byzantine art such as L’Amuri è held in the beautiful Roman venue of “Eleonora Altamore’s” abode in 2015, 2019 and 2021. In 2021 she was honored by the “International Spoleto Art Festival” award 2020 for art.

In 2021-2022, she was the protagonist of a travelling collective exhibition which from the historic Caffe Letterario Sansi in Spoleto was then hosted at the Archaeological Museum of Monteleone and, later, in the headquarters of the European Parliament in Brussels. In 2021, she was also sent to participate in an important artistic event in Tashkent in Uzbekistan. In 2022, she had her own show at Villa Pannonia on Venice-Lido coinciding with the opening of the 59th Venice Biennale. During this year, she has also organized an additional solo show at Cafe Letterario of Sansi in Spoleto.

In September 2022 in Florence she received the prestigious “Ponte Vecchio” award from the association “Toscana Cultura”.